It is a global day celebrating the social, economic, cultural and political achievements of women. The day also marks a call to action for accelerating women's equality.

The theme for this year is an equal world is an enabled world.

This year we are raising awareness about the inequality of access to care and support for women following the death of a baby.

Bereaved mothers tell us that the level of care they receive depends on where their baby is born. Current levels of support offered after a miscarriage, stillbirth or neonatal death are inconsistent across the country.

If you are of an ethnic minority or economic group, the outcomes of birth can also be different. For example, pregnant black and minority ethnic women and socially deprived women are far more likely to have a stillbirth. 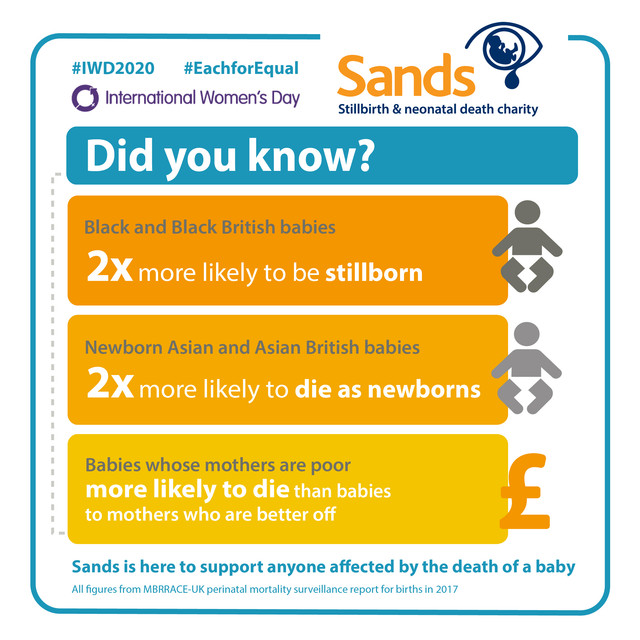 Rebecca Linton lives in Birmingham with her husband Patrick and three-year-old daughter Jade and she has shared her story of baby loss with us:

“We didn’t know the gender of our first baby so we refer to them as ‘Baby L’.  Baby L was considered a missed miscarriage at three months gestation in 2011. We also lost our identical twin boys Joshua and Isaiah in 2012 and our daughter Jada Lee in 2013.

“We lost Jada Lee at 21 weeks 5 days, which was also considered late miscarriage. However Jada was born alive but died less than 7 hours after birth.

"Changes to my cervix were noticed at my detailed scan with Jada Lee a few days before giving birth to her and I was given an emergency cerclage which was administered too late and triggered premature labour.

"After doing extensive research into the stitch/cerclage and nothing else being able to be found as the reason for my losses I requested to have a stitch/cerclage in my following pregnancy which the hospital eventually agreed to after much persuasion.

"This was successful and our beautiful daughter and rainbow baby Jade was born in October 2016.

“We were not given a reason for Baby L’s death aside from that this happens to 1 in 4 pregnancies.

"After completing an autopsy on Joshua and Isaiah they were not able to find anything wrong or a reason why we lost them.  This was the same for Jada Lee.

“We received no bereavement care from Dudley Road Hospital. But I was given a leaflet advising on some of the physical effects of baby loss.  There was no emotional support given. In fact, I was sent home and told I would pass the baby like a heavy period and no further action was required on their part.

“Five days later I contacted my doctors as nothing had happened and I was still experiencing pregnancy symptoms. They contacted the hospital booked me in for a D and C (Dilation and Curettage) for the following day. However, I haemorrhaged that night at home and nearly died.

“Birmingham Women’s Hospital had a bereavement support worker that my husband and I met with and they were the first to introduce us to Sands and the Miscarriage Association.

“The hospital gave us memory boxes for our twins and Jada Lee.  They also did ink hand and footprints for the twins and photographs for Jada Lee.  We were also given the stethoscope that took Jada Lee’s first and last heartbeat.

“I was surprised at the lack of conversation surrounding baby loss and knowledge of available support services. At times it felt like our babies were meant to be kept a secret like we shouldn’t talk about them, so we wouldn’t make others feel uncomfortable.  During this period of loss my faith and family were my anchor.

“Experiencing baby loss made me aware of how isolating and alone losing a baby can feel. I wanted the pain and loss we went through to be able to help someone else. It drove me to form a movement called Get Back Up Again. My aim is to encourage, motivate and inspire those on their journey to life after loss and let them know they are not alone.

“For the last 2 years as part of Baby Loss Awareness Week, I have hosted a baby remembrance service to commemorate the lives of babies gone too soon and break the silence around pregnancy and baby loss.  These services have been welcomed and have helped many families along with my own.

“I wanted to share my story on International Women’s Day as it means a lot to different people.  To me it is a time to remember, honour and celebrate the work of women past and present.  It’s an opportunity work together to make a difference, to acknowledge, encourage, inspire and empower.

“The losses that I have experienced motivate me to encourage and inspire others to Get Back Up Again.  After everything I have been through, and the fact that I am still here, I want my experience to help someone else. I want them to know that they are not alone.”

Clea Harmer, our Chief Executive, said: “There is inequality around baby death in the UK which is unacceptable. Every bereaved mother should have equal access to specialist care and support regardless of where she lives or where she gives birth. It should not be a postcode lottery as to the level of care received when a baby dies.

“It is long overdue that the NHS makes the provision of excellent bereavement care mandatory across the UK. We believe every parent should be offered the bereavement support they need, when they need it, and for as long as they need it.”

The first IWD gathering took place in 1911 and was supported by over a million people. Today, IWD belongs to all groups collectively everywhere. IWD is not country, group or organisation specific.

For further information visit the International Women’s Day website or search for #EachforEqual and #InternationalWomensDay on social media for the latest news.

To guide you through this difficult time, we have put together our Bereavement Support Pack. It is free and the information it contains may be helpful to you both now and later.

Donate today and you will make a huge difference to the lives of bereaved families in their darkest hours and give them hope for the future.

How we offer support

The How we offer support section of our website details the different ways we can support you.